The Telegraph reports: Kate ‘Rew was speaking as news emerged that at least 17 Britons had lost their lives as a result of swimming in quarries and other open water spots during the current heatwave.’ ‘Rew had the following advice for would-be open water swimmers: * Don’t swim when drunk * Don’t jump in without knowing depth of water * Make sure you know about currents * Find out about the swimming place before you get in – both by speaking with people who live locally and ch

Wild Swimming a Great Way to Escape the Heat!

In England we need more recognised safe bathing areas to escape the heat! Teenagers turn skate-park into swimming pool Crowds of young people flocked to the skate park in Hebden Bridge, West Yorkshire, when word spread that it had somehow been filled with water from the nearby River Calder to allow youngsters to cool off. Education and safe swimming locations are sadly lacking in England the birthplace of modern swimming. Their are more than 1,900 EU designated inland bathing

David Cameron speaking in 2010. (Photo credit: Wikipedia) The Guardian today featured this article on Wild Swimmers: In taking an early-morning dip in a Northern Irish lough, David Cameron has joined an illustrious list of wild swimmers, from Benjamin Franklin to Katharine Hepburn… As a self-confessed wild swimming addict, I can’t quite believe that David Cameron nearly beat me to the water on Tuesday. While he was swimming at 6am in a Northern Irish lough, I was finishing my

Warm Weather Draws Swimmers to the Lakes of Finland

Swimming days are here Lake water temperatures across Finland are now a few degrees higher than usual for this time of year. Balmy weather forecast over the next few days will heat up the waters even more – meaning the time is right to break out summer swim gear. More… #WaterSports #lake #swimming #SwimmingandDiving #Finland #sport #England

Children Can’t Swim to Save Their Lives

Swim Smart Educating adults and teenagers about Wild Swimming water safety Wild Swimming is great fun but remember no one is drownprof; a life lost in a swimming incident will impress no one. First: learn to swim well. Don’t drink and drown! Alcohol and drugs boost confidence but reduce ability. Don’t swim alone! Stay close enough to others to give and receive help if necessary. Swim only in clear unpolluted water. Don’t let weeds or submerged rocks take you by surprise. Chec

Picture of the Week: Wild Swimming in Friedrichshafen Germany

Across Europe swimming is actively encouraged. Here at Friedrichshafen the lake is seen as a tourist attraction and so swimming features heavily on its tourism website. In Scotland their is unrestricted access for swimming in any river, lake, or reservoir as per the Land Reform (Scotland) Act 2003. In Ireland the waterways generally have open access for swimming. In England negative attitudes rather than legal restrictions prohibit free access to rivers and lakes for swimmers

Picture of the week: Wild Swimming Beaches in Sweden

An idyllic summer scene from Sweden. One that could be replicated in England this summer if only we had a right to swim. Swimming was once so popular in the UK that concerns over public decency led to the enactment of the  local act of 1868 which empowered local authorities to restrict bathing in watercourses on grounds of danger or indecency… This led ultimately to the near extinction of wild swimming in England. Discover the rich history of the British Swimmer by reading Hu

20 swimming pools that you can’t swim in…

A popular, even if not quite official swimming area on Wuhan’s East Lake. This one is off Donghu Nan Lu, on the south-east side of the lake, near Wuhan University’s main campus. Wikipedia In countries that have not passed through a sustained period of intolerance towards swimming in the wild, opportunities like this abound. Discover why wild swimmers were at one time chased out of the water in the U.K. by reading: Hung Out to Dry; Swimming and British Culture. #Wikipedia #Wat

Picture of the Week: Wild Swimming in Bern Switzerland

River Swimming in Bern Switzerland It’s hard to imagine now, but at one time river and lake swimming were encouraged throughout Britain. Before the current era of NO SWIMMING signs, wild swimming was very much the thing to do each summer. Those that chose not to swim enjoyed watching the spectacle of fun freedom and adventure as it unfolded in the waters all over the UK. Later the lido era drew huge crowds of spectators as swimmers, divers and beauty contestants pulled in cro

The Legacy of Free Swimming.

The chart shows the steep rise in swimming popularity as a result of the government’s free swimming program as reflected in swimming pool attendances in Bradford. Similar statistics countrywide show a degree of success in getting firstly those over 60 and later those under 16 active and into the water. Despite the steep increase in attendance figures peaking in 2009-10, the economic slump led to austerity measures and funding cuts. The goal of free swimming for all by the tim

Picture of the Week: A Peep at the Mermaids of Margate

The History of Swimming Costumes On a sultry summer’s day, what could be more natural and liberating than to dip into a lake or river to complete the picture of scenic perfection? In calm waters, swimmers get twice the view as water mirrors the colour and adds texture to the panorama they swim into. We love to live and holiday close to water; in fact you only have to mention a ‘sea view’, for house and holiday prices jump up. Across Scotland, in parts of Wales and throughout

A young wild swimmer sparked a major rescue operation this Friday. A passer-by saw him swimming in fast flowing water in the River Kennet (Reading) and called the emergency services. The rescue was called off at the last minute after firefighters discovered he had jumped in for a dip. Crews from Caversham Road, Dee Road, Wokingham Road and the brigade’s control unit went to Fobney Street after a concerned passer-by noticed him in the water near Loch Fyne restaurant at 2.30pm. 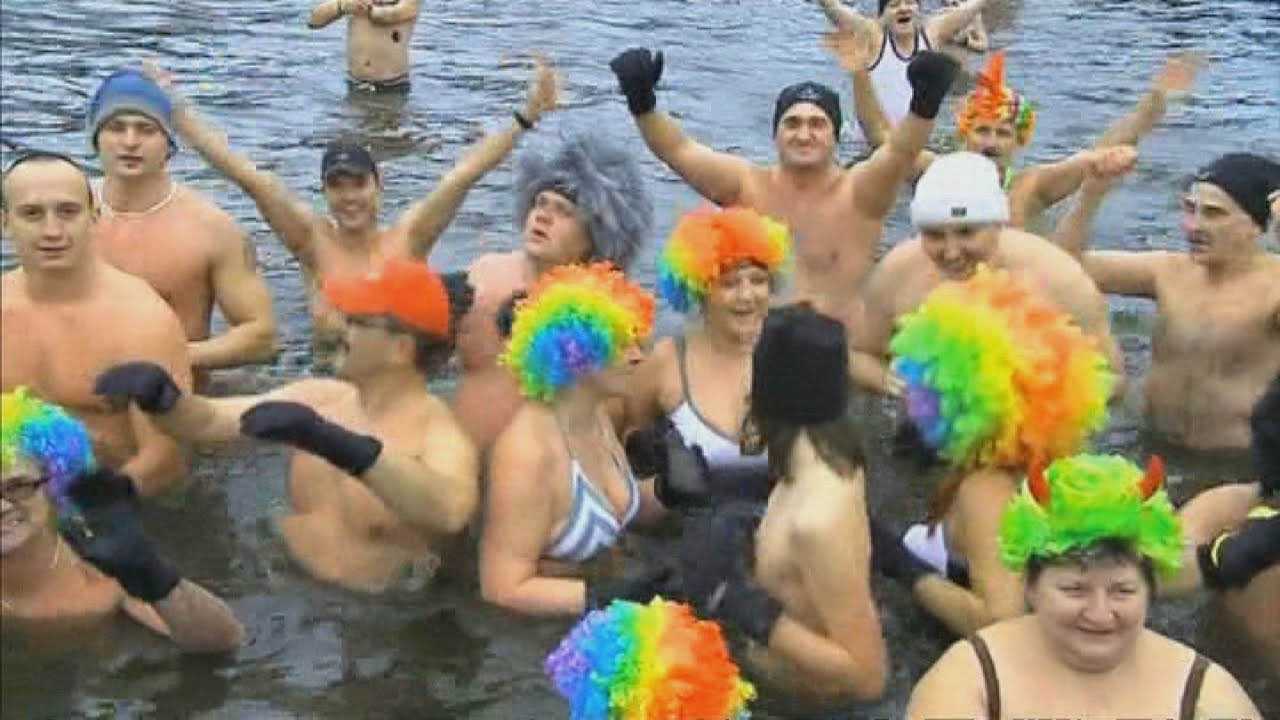 More than 200 people of all ages take part in an event in Olsztyn Poland to mark the beginning of the winter swimming season. Discover how we in England led the world into a new association with cold water… #wild #Poland #WaterSports #Olsztyn #Sports #winter #history #swimming #Mexico #cold #England #TurnerMaine #IronmanTriathlon

Appeal to British Parents: Teach Your Children to Swim!

10% of children in the UK experience an accident in the water due to a lack of swimming experience. 40% of children in Britain cannot swim. 50% of parents do not believe learning to swim is an important life skill. 60% of parents are worried about their children drowning due to poor swimming skills. Nearly 75% of British Children had never had a swimming lesson or been taught by their parents. Results of a survey commissioned by Speedo as reported in the Telegraph. The Facts:

A report from The New Zealand Herold into water quality for New Zealand’s monitored recreational sites on rivers, shows that 52% are unsafe for swimming. The results showed water quality was poor or very poor at 52 per cent of monitored river sites. A further 28 per cent were graded “fair” – with a risk of illness for those swimming there and only 20 per cent of monitored river recreation sites were graded good or very good. The report canvassed sampling from 210 freshwater b

Back in the seventy’s swimmers were chased out of rivers across the country as water pollution posed an increasing health risk. Children were scared out of their wits by a a sinister public safety film, with swimming pools promoted as the only safe place to swim. Now as bathers refuse to wash properly before entering the water, swimming pools have become polluted. Dr Chalmers (Public Health Wales)  said “cryptosporidium (a disease that causes severe diarrhea) could survive ch

The NHS has released a set of guidelines highlighting the health hazards faced by the growing number of open water swimmers. At the top of the list: jellyfish stings, followed by shark attacks and sewage in the sea. Sensible advice is included from the River and Lake Swimming Association which states: Only swim in rivers and lakes if you’re a good swimmer. Don’t jump or dive in. If in doubt, don’t go in water that’s too deep to stand up in. Don’t swim after drinking alcohol o

Fishermen in Germany blame wild swimmers for a depletion of fish stocks, claiming that swimmers urinate  whilst in the water. German officials have banned swimmers from Eichbaum Lake while studying the link  between fish death and public urination. It is true that human urine acts like a fertiliser which encourages the growth of algal blooms. These blooms deplete oxygen levels in lakes and can lead to fish deaths. However the most likely cause of the deaths seems to be ice sk
34
5
67